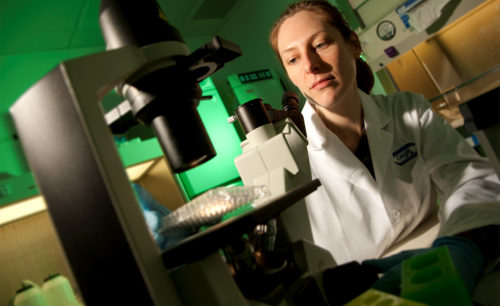 In 2014, an estimated five million Americans aged 65 or older were living with Alzheimer’s disease. That number is expected to triple by 2060.

Neuroscientist Susan Catalano wanted to find a way to not just stop Alzheimer’s progression, but restore brain function to those with the disease. She cofounded the company Cognition Therapeutics in Pittsburgh, Pennsylvania to develop a drug that could target the main toxin thought to cause the disease. “I felt strongly that the way to move the needle and modify Alzheimer’s disease course was to stop this protein toxin known as the amyloid beta oligomer,” says Catalano, referring to small clumps of the amyloid beta protein that disrupt communication in the brain.

The company employed a unique way to screen for potential drugs by running experiments on actual brain cells instead of the surrogates most other researchers use. Through this screening process, Cognition’s scientists narrowed their search down to one molecular compound that prevents the “clumps” from latching onto brain cells.

Much of the company’s efforts have been funded through the NIH, including $66 million from the Small Business Innovation Research (SBIR) and Small Business Technology Transfer (STTR) programs. Catalano says small business funding from the NIH has been “utterly key for our success.” Their SBIR and STTR grants, primarily awarded by the National Institute on Aging (NIA), supported the initial screening and discovery of their current drug candidate, as well as the regulatory studies needed to enter clinical trials. Data from these studies supported FDA’s decision in 2017 to give the drug Fast-Track designation.

Phase 1 clinical trials have shown that Cognition’s drug is safe and well tolerated in people, and four Phase 2 studies are currently testing the drug’s ability to alleviate symptoms in different types of Alzheimer’s patients. Data from one of the Phase 2 studies has already shown promising results—participants who took the drug showed improvements in their disease progression compared to those who took the placebo. In June 2020, Cognition received an independent research grant from NIA for $75.8 million to support a fifth Phase 2 study, in collaboration with the Alzheimer’s Clinical Trials Consortium.

Catalano says that the brain toxin they are targeting likely plays a role in other types of dementia. The company plans to eventually test their drug on related diseases, like Lewy body dementia and Parkinson’s disease.

With federal support and a track record of meeting research milestones, Cognition grew more attractive for outside partnerships. In October 2021, the company went public (CGTX).

“As it’s become very challenging to develop Alzheimer’s therapeutics because of clinical trial failures, we see large pharmaceutical companies getting out of Alzheimer’s therapeutic development entirely. One of the only sources of capital for a small company like ourselves is the NIH, and specifically, the SBIR program,” says Catalano. “Without that we would not have been able to achieve the successes in the clinic that we’ve achieved.”