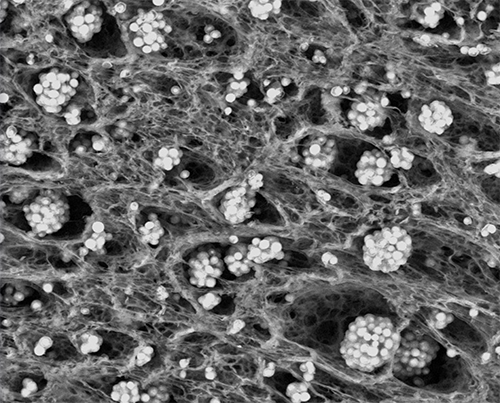 The Environmental Protection Agency estimates that 10% of drinking water in California is contaminated with high levels of nitrate, a toxic pollutant. Nitrate can’t be removed from water by boiling, freezing, or filtering; instead, some water treatment plants simply dilute high-nitrate water with low-nitrate water. This is not a sustainable practice.

There are microscopic organisms that can degrade nitrate and other pollutants in water, but they tend to die fairly quickly when simply free-floating in a liquid; this creates a “sludge” of dead microbes that then has to be removed from the drinking water.

Microvi founder Dr. Fatemeh Shirazi realized that in nature, these organisms tend to live in communities and clusters, and this helps them live longer and work more efficiently.

She founded Microvi in 2008 based on this idea, called MicroNiche Engineering (MNE). Microvi creates structures and materials, called biocatalysts, in which pollutant-eating microbes can form communities. Having this habitat makes the microbes much more efficient at degrading nitrates and other toxins and keeps them alive far longer.

The initial testing for the technology was funded by a Superfund Research Program small business grant from the National Institute of Environmental Health Sciences. Microvi intended to use the biocatalysts to remove the water contaminant perchlorate, an industrial solvent often found in combination with nitrate. But once the technology was tested, scientists at Microvi discovered the way it broke down perchlorate and nitrate were similar enough that it could clean up both contaminants.

Microvi aims to create much more reliable and sustainable technologies to provide biological solutions to our problems.

Microvi’s subsequent Small Business Innovation Research and Small Business Technology Transfer grants allowed them to integrate empirical data from the biodegradation of different kinds of contaminants, expanding the applications of their technology.

“Our very first funding came from the NIH,” Shirazi said. “The origins of our success came from an NIH-funded project and since then, we have been able to build on and expand our knowledge and tackle other pollutants.” 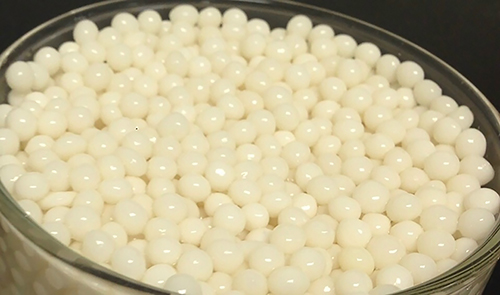 Microvi, based in the San Francisco Bay Area, has been installed in drinking water plants in the US and Australia. The Sunny Slope Water Company in Pasadena, California, has been using Microvi’s product to remove nitrates for over two years. California has about 3,000 wells that have been contaminated with nitrate, and Microvi will soon expand to more, larger plants in California’s Central Valley. They are also expanding the capabilities of their biocatalysts.

“Biology is a very powerful tool,” says Shirazi. “Microvi aims to create much more reliable and sustainable technologies to provide biological solutions to our problems.”