Millions of people suffer from at least one of thousands of rare diseases. Despite this fact, drug companies tend to focus on developing therapies for diseases that affect many people.

“Rare disease by and large has more unmet needs than other diseases,” says Chris Gibson, co-founder and CEO of the biotechnology company Recursion, whose goal is to provide more patients with affordable treatment options.

It started with a competition between a biologist and a computer program to see who could better predict which drug candidates would make better medicine.

“It made sense for us to sort of do an experiment and ask which--the computer or the person--could do the job better,” says Gibson. In a test looking for drug candidates to treat a rare brain blood vessel disease, the computer predicted more successful treatments than the biologists.

When Gibson and his co-founders, Dean Li and Blake Borgeson, started Recursion, they were using their computer program to predict treatment for a handful of rare diseases. Today, the 165-employee company is studying dozens of drug candidates and completes half a million robot-run experiments a day, which now Gibson says out-compete human predictors. This expansion was possible thanks to the more than $200 million in private funding.

It started with a competition between a biologist and a computer program to see who could better predict which drug candidates would make better medicine.

But Gibson says it was early NIH support that paved the way for acquiring those private funds. Recursion received a Direct to Phase II Small Business Innovation Research grant from the National Center for Advancing Translational Sciences in 2015. “The NIH was sort of our first seed investor because they really started the process and created a de-risked environment. I think it gave a lot of investors confidence that despite being a little outside of the box, what we were doing had real scientific potential.”

The company now has two drugs in Phase I clinical trials, one to treat a nervous system disease and one to treat the blood vessel disease from Gibson’s original experiments, which causes seizures and bleeding in the brain. 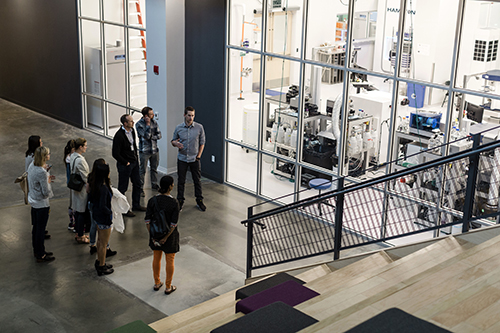 The NIH provided support outside of just dollars, says Gibson, by fostering an environment for networking and connecting with investors, and by helping to spread the word about the company.

Gibson hopes that within the next decade his company and others will “fundamentally change the pace, scale and cost of discovering medicines.” He adds, “what really matters at the end of the day, the whole reason we're building the technology platform, is to get medicines to patients.”